on Monday, 31 August 2020. Posted in The Forest Conservation Burial Ground

First Burial at The Forest

Life surrounded us as we approached the grave site with Scott’s body wrapped beautifully in a silk shroud woven with color. Deer walked across the meadow while we watched from the edge under the protection of towering pines and firs. Though this was a reverent affair, the swallows in the nearby nest box maintained their dutiful rhythm of caring for the new lives entrusted to them. 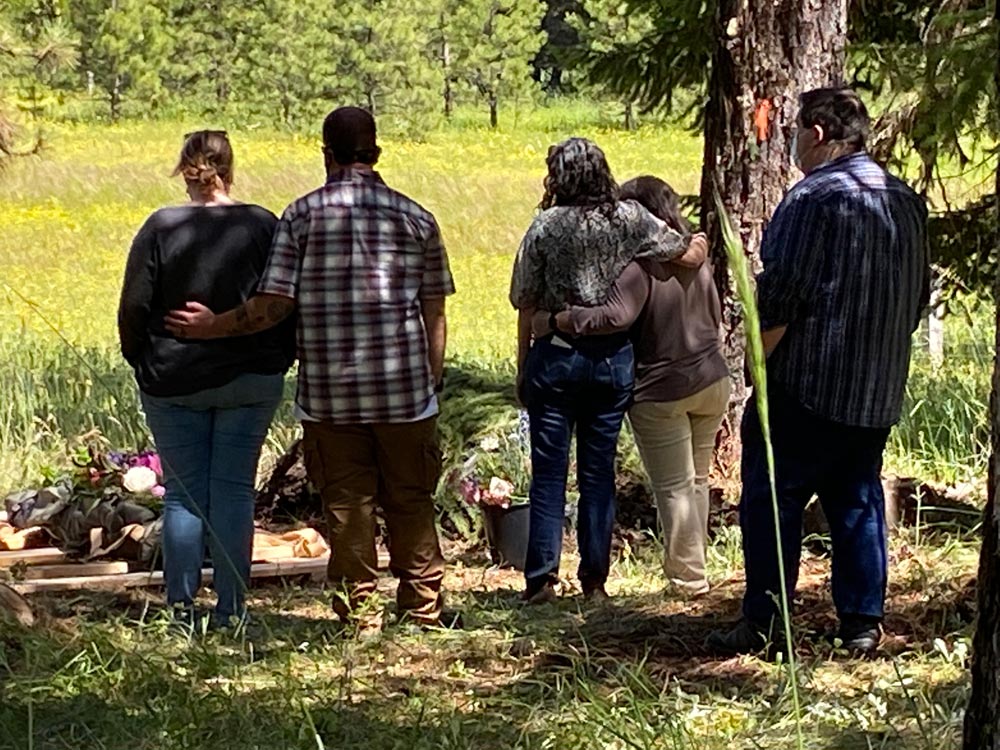 The Forest Conservation Burial Ground, Oregon’s first dedicated natural burial ground, had only been officially open for burials for about two weeks when we received the call. She was a friend of the family and was stepping up to offer support in a time of need. The backstory was tragic. Two mid-life and in love sailors adventuring around the world, finding themselves on land (in Miami, FL) to be with family and see what would unfold with the game-changing novel coronavirus. Their paths took a sharp and unexpected turn one morning over coffee when Scott collapsed. A few days later he would be pronounced dead. His wife, Viviane, knew that a natural burial was the choice for them, as was returning to the west coast. After a few email and phone exchanges, the burial was scheduled and travel arranged.

Viviane and her mother arrived at the ranch a few days before the burial to settle in and connect with the land in the comfort of a rustic wall tent. She found the grave site that was right for Scott’s burial, and choose the site next to his to be her own resting place in the future. Viviane wanted to be a part of it all, offering to help with digging the grave and purchasing buckets of fresh cut flowers from a local organic flower farm. She cut a handful of deep red peonies from the farm house garden too. The final preparation of the grave is cutting and placing evergreen boughs inside, which Viviane also did. She was touched that in the digging of the grave, a small boulder was unearthed and placed at the head of the grave; it will be engraved and placed next year after the earth has settled.

When the afternoon of the burial was upon us, the full freshness of early summer was in the air while the sadness of a beautiful life cut short rested in our hearts and minds. Due to safety precautions, the number of guests was limited and all were wearing masks. Six of us, including Viviane, carried Scott’s body from the hearse to the grave site. We placed Scott’s body on boards lying across the grave. Viviane began to speak directly to Scott as she had done many times throughout their life together. Her words were an expression of a well-practiced, active love. It was intimate and tender. Each family member followed suit, approaching Scott’s body and speaking to him, or his spirit, directly. Loving memories, regrets and legacy were shared. When there were no more words, the family began adorning Scott’s shroud with fragrant and gorgeous herbs and flowers. The scene was pure beauty: a body that had carried a loving man, now wrapped in silk, covered in flowers and surrounded by loves ones.

When Viviane was ready, we lowered the body and began filling the grave. This, too, was invitation to be an active participant in laying a loved one to rest in the Earth. Everyone present helped in some way, and many hands made light work. It seemed we were all surprised as we completed the task by covering the mound with the topsoil that had been removed first the day before.

After placing more flowers on top of the grave, the family made their way back to the cemetery entrance to enjoy food and drink together. This was also a time of sharing memories, laughing, and considering the future (including hopes of a party at the ranch next year with all of Scott and Viviane’s friends).

In some ways, there was a perfection to Scott being our first burial. Our cemetery is the first new cemetery in the state of Oregon in over 50 years, and the first dedicated natural burial ground. Scott and Viviane just happen to be software experts by trade, so they were both used to being the first to try something new. And, they were natural-born adventurers through and through. In this way, it was right.

Viviane and her mom spent one more night on the ranch before returning to Miami the next day. We noticed later that they had returned to the grave site before departure and encircled the burial mound with pine cones, one more physical act of love, honoring, and well-wishes for whatever may lay beyond.

We weren’t expecting to have a burial so soon after opening, nor for the death to have been someone in the prime of life and to have died on the other side of the country. When all was said and done, the beauty and simplicity of a forest burial carried all of us through this, and we cheered knowing that this natural burial ground is here for those who know that this is the right choice for them.

Viviane gave permission for this article and photos taken during the burial to be published.

on Tuesday, 21 April 2020. Posted in The Forest Conservation Burial Ground

We hope that you all have been safe and healthy in the midst of the COVID-19 pandemic and that the budding spring is bringing you joy. Here at The Forest Conservation Burial Ground, we believe that every day is Earth Day. That is why we're committed to doing our part to protect, conserve, and renew our land for future generations.

To provide a space to reconnect our human experience of life and death with land conservation. We are achieving this by offering natural burial in reciprocity with the living landscape—reinforcing the vital connection between ourselves, one another, and the natural world.

Reciprocity is the practice of exchanging with others for a shared benefit. It is mutual dependence, action, and influence—and we believe it is the bedrock of cultural resilience and sustainability. We aim to reflect this reciprocity in our actions and choices, both in life and in death. 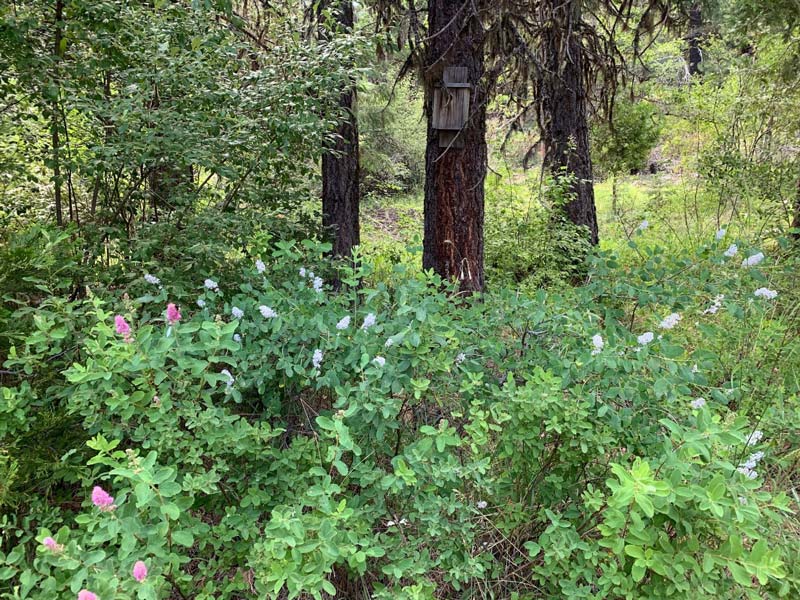 What is Natural or 'Green' Burial?

Natural, or green burial is essentially the way humans have been buried for centuries leading up to our modern-day conventional practices of embalming and burying with concrete, metal, or plastic.

In a natural burial, a person is buried without embalming, without the use of grave-liners or vaults, and only using materials that are biodegradable such as shrouds and native-wood caskets. The body is buried only 3 feet deep, rather than 6 feet deep, as this allows the soil microbes to benefit.

To put it simply, natural burial is just that: 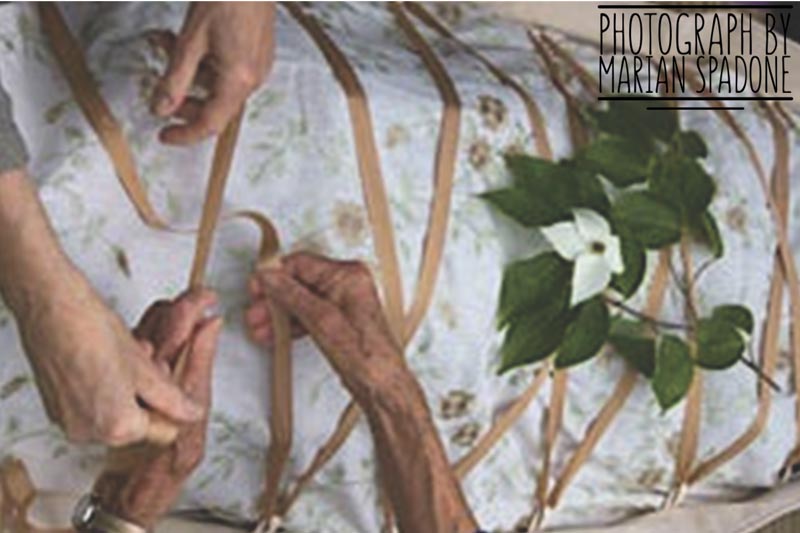 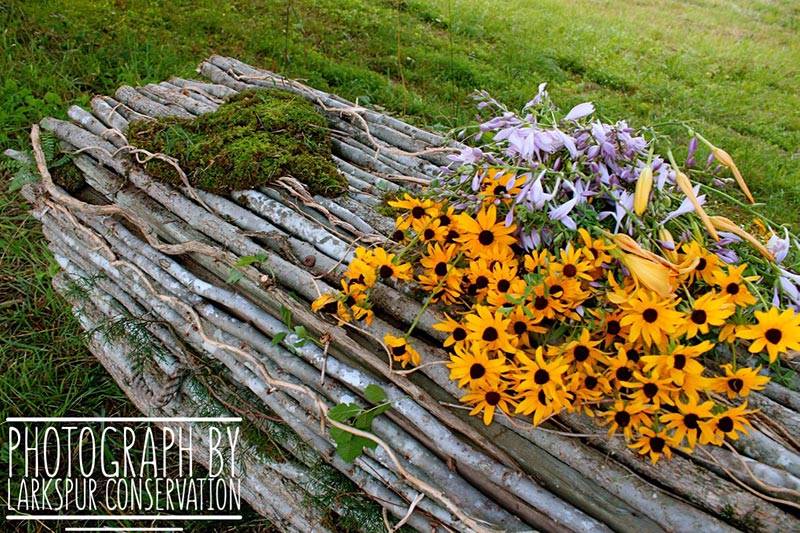 The Forest is proud to be the first dedicated natural burial ground in the state of Oregon! We take all of the goodness of natural burial in a traditional cemetery and apply it to the entire environment rather than keeping it to just a few isolated sites amongst other conventional graves.

We believe in conservation, and intend to protect this land—as a whole living entity—with a conservation easement. This means that burial fees will go back into upholding our values of conservation, restoration, and management of the soil, forests, and wetlands. 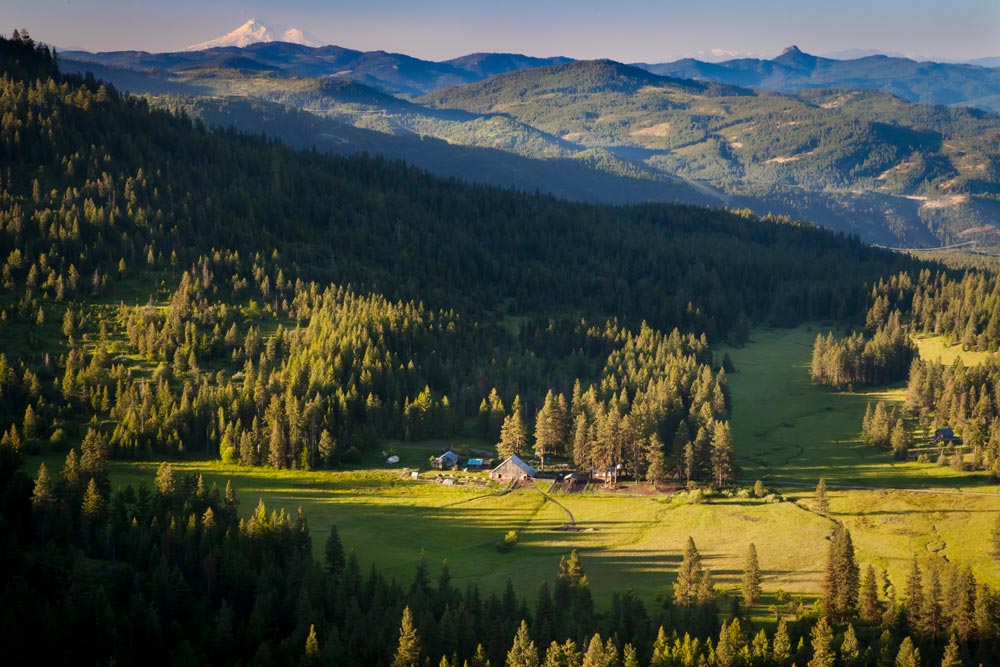 The Forest is situated on 18.4 acres of the 445-acre Willow-Witt Ranch, a private in-holding within the expanded Cascade-Siskiyou National Monument in Southern Oregon's high country, 30 minutes from Ashland.

Since 1985, Willow-Witt Ranch has been proud to be a good steward of this unique ecosystem. We work daily to enhance the health of our land, water, and air and to provide organically produced food, products and services for the local community. 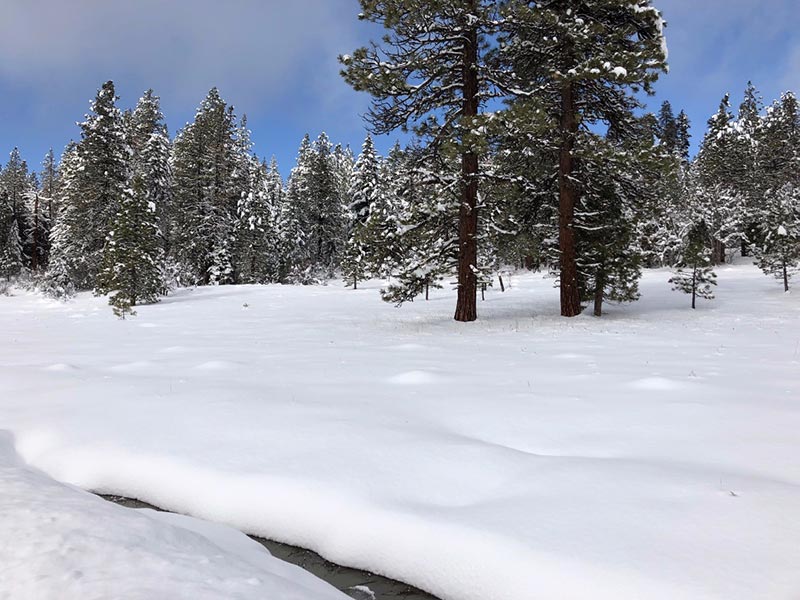 Green burial simply makes sense here. Life is vibrant and the seasons pass amid mature conifers, oaks, native shrubs, grasses, and wildflowers. Burial sites overlook meadows and seasonal wetlands. Paths and trails wind through the cemetery, inviting us to pause, listen to the wind in the trees, watch the birds, and spend time with nature. 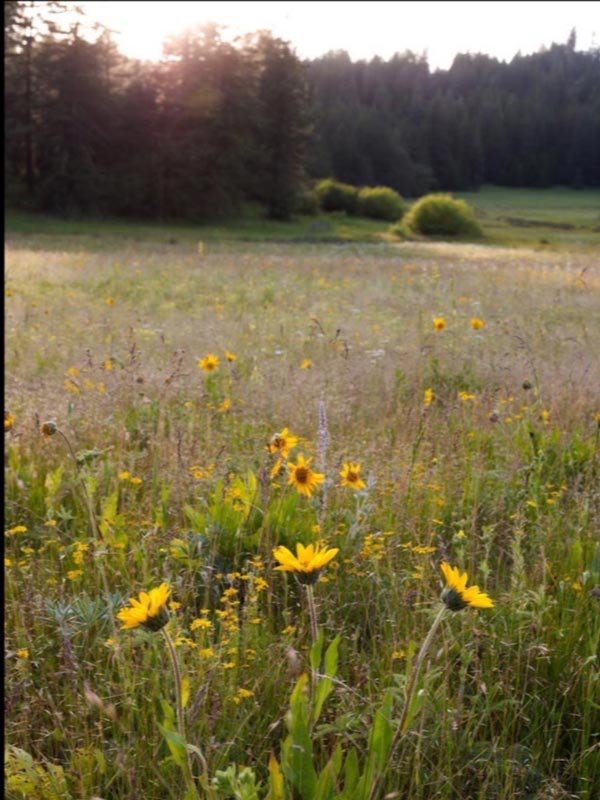 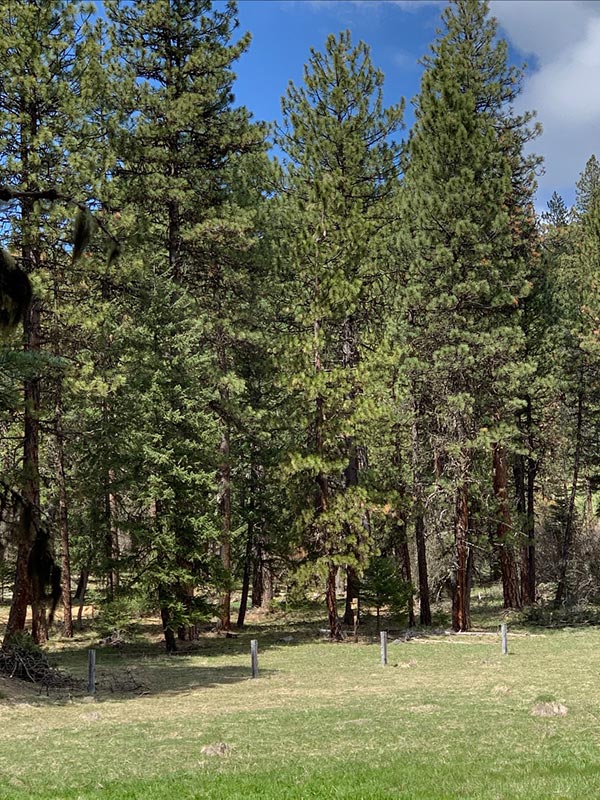 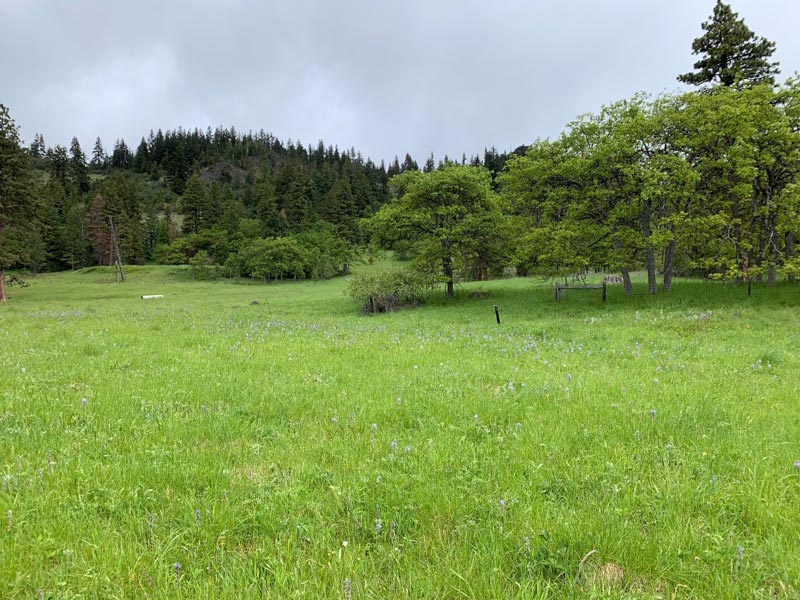 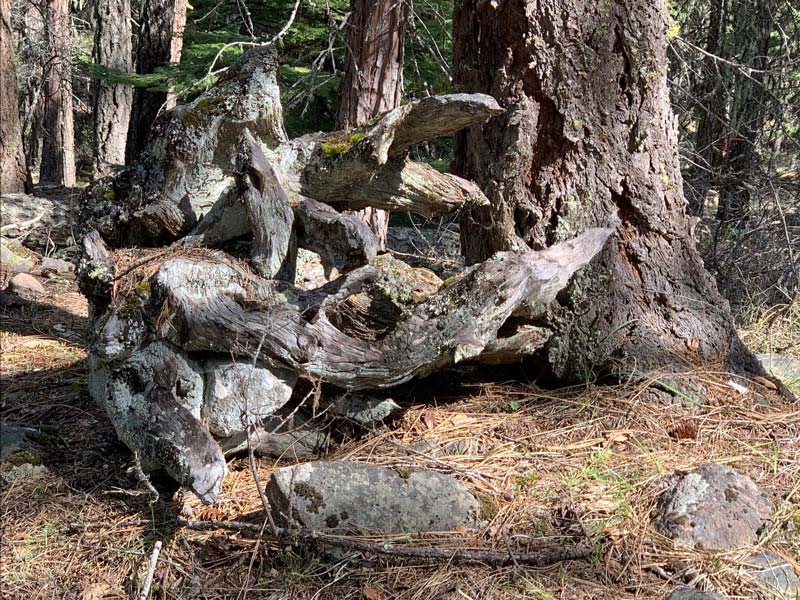 A Few Things That Make The Forest Special:

A NOTE ON CREMATED REMAINS

Cremation is the method of disposition that some people feel suits them best. Our cemetery supports the interment of cremated remains in biodegradable urns, or scattering.

Many people who chose cremation are influenced by economic factors, and we encourage you to check the actual average costs of cremation on the west coast to better decide if it is right for you.

We also encourage you to take a look at these environmental statistics on conventional burial and cremation, collected by the Green Burial Council: https://www.greenburialcouncil.org/media_packet.html

We are so excited to open The Forest to our community, soon. Please stay tuned, and we will let you know when we officially begin on-site tours. We will continue to monitor the COVID-19 pandemic in order to determine when it will be safe to host community gatherings.

When we can safely open, we will host a celebration in gratitude of nature, and would love to have you join us. In the meantime, please take a virtual tour.

Stay safe and be well.
In gratitude,
The Forest Conservation Burial Ground

Take a virtual tour to see our inspiring grounds!

Individual tours and rates are available on request.

Willow-Witt Ranch is dedicated to the conservation and restoration of a unique ecosystem in the Southern Cascades, and the headwaters, wetlands, and forests that arise there. We provide education on the values of ecology and of the complex web of food and environment by operating a small certified organic farm and Farm Stay accommodations.