Dr. Lanita Witt, co-founder of Willow-Witt Ranch outside Ashland, died Dec. 15 in a hospice bed with Suzanne Willow, her wife of 43 years, lying beside her, holding her hand.

“I wouldn’t have it any other way, never, never. We talked about it, and that was our wish. That when she went, we would be in bed together. And we agreed I would get in bed with her, whatever time of day it was. It happened to be in the middle of the night,” Willow said. 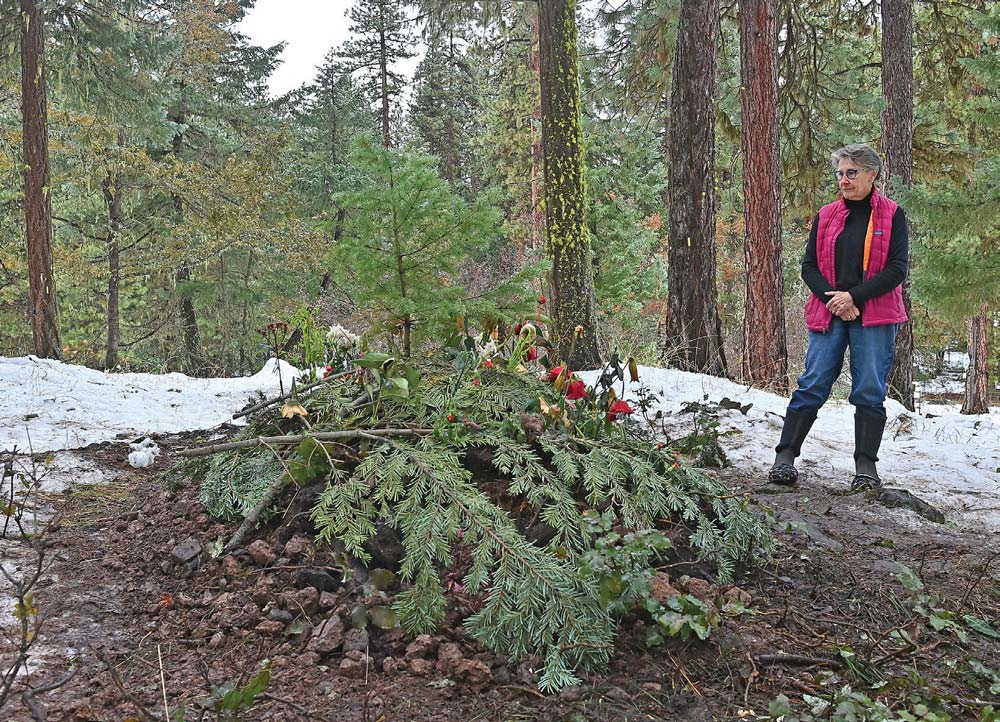 Willow was warming her hands by the high-efficiency fireplace that serves as the sole source of heat for the couple’s gently renovated 1920 farmhouse at the center of their storied 445 acres — Willow-Witt Ranch.

They are all good days, she said, but one week into her new life without her other half, there are some days she can talk and some days she can’t, she said. Some days she will enjoy the work left to do on their land; other days will be spent venting grief.

On Thursday she was talking, climbing into her SUV to drive down a steep, slushcoated driveway to Witt’s grave — hand-dug in the green cemetery the couple opened the same year Witt received her diagnosis of terminal cancer.

“She was an amazingly smart, inventive and capable person who could do just about whatever she put her mind to,” Willow said.

Willow led the way across a crunching blanket of snow toward a mound of earth decorated with pine boughs and wilting roses. The couple’s gray-muzzled dog circled the mound, sniffing. On Monday, she said, workers on the ranch who knew them both carried Witt’s body in a procession from the house.

“Monday was the first day it was supposed to be cloudy like this, and there was sun instead. Literally, we were getting ready to lower her, and this shaft of sun came in from over there and just lit up her face and shoulders. It was the most beautiful thing,” she said.

The couple did not set out to open a green burial ground — it was one of the ways they worked with what life made available to them in their four decades together.

Witt was an obstetric gynecologist, delivering babies into her 60s. In her golden years, she started practicing urogynecology, treating one of the torments of old age — dysfunctions of the pelvic floor and bladder, including both rectal and urinary incontinence.

“She called herself a wet pants doctor,” Willow said. “Everybody at work — she had Witt-a-cisms, I believe they called it Wittisms — they would laugh; they would also roll their eyes,” she said of Witt’s wit.

When the ranch posted on Facebook that Dr. Witt was gone, over 1,000 people “liked” the post and more than 200 commented.

“She was a loving force,” James Theen said.

“I loved that smile and laughter, you knew her entire soul was in it,” Jan Jackson said.

“What a beautiful legacy she has helped create with Willow-Witt Ranch. Her spirit will live on in that land,” Amy Grosch Cavalleri said.

In 2018, Witt unsuccessfully ran for Jackson County commissioner. In an interview with a local TV station, she envisioned urban infill to help prevent homelessness and supply workforce housing. She proposed creating more jobs in forestry by employing young people to make firebreaks along the roads. Their proposed reward would be a state-funded community college education, bolstering the flagging ranks of skilled tradespeople.

The land came from dreams, Willow explained. Early in their marriage, they wanted a dramatic landscape. Something to complement Witt’s early memories of magnificent storms seen from miles away across the plains of Texas and Willow’s formative years in the Sierra mountains. They wanted a place with a feeling of community where they could experience all four seasons and grow organic food.

It was Dec. 31, 1984, on a trek up Grizzly Peak in their Mazda pickup, when their daughter noticed the little house and barn nestled into the hillside below.

They fell in love with the way the light hit the land, and the view of the mountains nearby. They called the number on a for sale sign the next day.

They bought the land under 4 feet of snow, with no knowledge of what kind of soil, what zone it was in or any other practical details.

Forests on the land were ragged from decades of logging. Wetlands on the property were eroded from 100 years of cattle walking in straight lines over the delicate volcanic soil below, diverting water into gullies.

They worked to restore the land. They created their own line of goat sausages, and they raised and sold pork, too. Last summer, they managed a bumper crop of tomatoes despite the frost. Mostly they grew sturdy greens like chard. For over a decade, they were a staple of the Ashland farmers market. 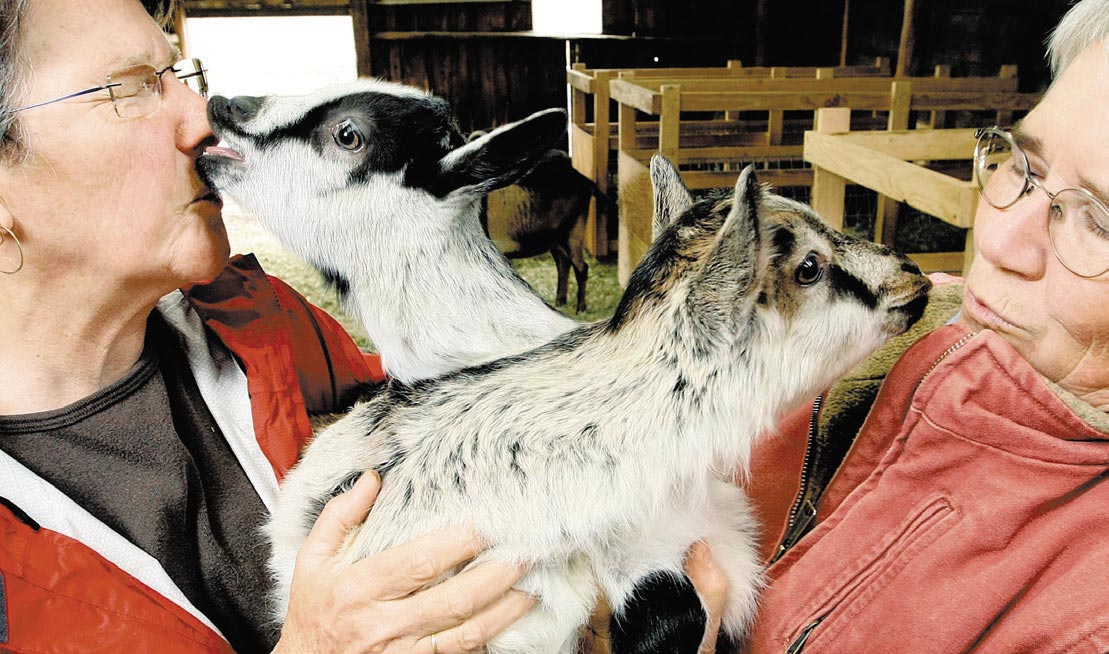 “We kind of lost money on all our farming stuff, but we had these great jobs in town, so we could support our farming habit,” she said.

The zoning allowed for five uses of the land outside farming, she explained. Forestry and logging, a school, a church, a campground, a prison or a cemetery. The prison is the only one they won’t do, she explained, gesturing at the snow-covered meadows and referring to them as a church.

The couple invited schoolchildren onto their property for 15 years to strategically plant willows that would hold in the ground and erase the cow-trail-made gullies. Last spring when she went out to look for where they would plant next, Willow realized the wetlands were solidly wet, and the restoration work was done.

“I took Lanita out and said, ‘I need to show you this,’ and we walked, and we just giggled,” she said.

She was proud to speak of the campground they built, where they have been holding a summer camp and outdoor education program since 2020. They even obtained a bus through a grant so they could include children displaced by the Almeda Fire still living at The Expo.

Where the trees grow the slowest, they decided in 2018 to start working on opening a natural burial ground. In 2020, it was ready to accept the dead. In 2021, they opened a pet cemetery, too.

She estimated the couple have planted about 10,000 trees over the years. Their restoration work caught the eye of the Pacific Forest Trust. Once Willow is laid to rest beside Witt, the land will be protected by a stewardship trust the couple wrote while Witt was dying.

The diagnosis came two and a half years ago, Willow explained. Witt was suffering from stomach pain. She noticed a small mass above the liver.

The day of the ultrasound and CT scan appointment, the pair didn’t wait for results. They drove out to a creek in Medford and parked the car. They knew, she said, that it was cancer, and it was bad. Together, they cursed what they knew was coming.

They sat there so long with the car’s lights on that the battery died, and it had to be jumped. The diagnosis came back — cholangiocarcinoma, a biliary tract cancer encapsulated inside the liver.

“It’s not curable. It’s terminal,” she said. “She did every treatment to prolong time that she could. There was never a hope of cure. Each one of them was to decrease the virility of the cancer to give us more time. We just each said we wanted every last second we could when she wasn’t miserable, and that’s what we got. We had good pain control for her; she wasn’t anxious or anything,”

They found the right amount of pain medication to preserve Witt’s clarity of mind and worked to maintain it through the years. But early on in their journey through the disease, the couple also chose to pick up the medication allowed to the terminally ill through Oregon’s Death with Dignity Act.

“I’ll be in bed with you when you take it; I’ll be with you when you go out. There is no reason in the world to be miserable, no reason to suffer. You are dying; you can speed that up if you can’t stay longer with comfort,” she said of the couple’s agreement.

The prescription was recently delivered to the police department unused.

In the final months, the couple squeezed into a little hospice bed, moved into the dining room so they could enjoy the east-facing view of a stand of leafless aspen trees. A brass curtain rod held up two luxuriant black velvet curtains on either side of a sun-kissed, snow-blanketed stand of trees. On a table by the window, a photo of the couple glowing in 1984 at their first of several commitment ceremonies before they could be legally married.

“My first reaction was, ‘Oh, my God, I’ll die the next day because I can’t live without you,’” Willow said of the diagnosis.

“But then we both said, no, I’ll actually keep living a nice, long time,” she said.

She remembered the song she played at Witt’s burial, “Breaths” by Sweet Honey in the Rock.

“It says those who have died are never gone; the dead are not under the ground; they’re in the rocks, in the trees; they’re in the air. I believe that. I don’t have a religion, so that really is what I believe: She’s here,” she said.

Witt’s body was kept at home for four days.

“I called it lying in home, instead of lying in state. There are plenty of cold spots in our house, so that helped. But we also used dry ice, which is standard,” she said.

Part of the reason was to give loved ones time to file in and say goodbye, but the other reason to keep the body lying in home was to give Witt’s soul enough time to get into the walls, under the furniture, under the rocks and the trees, Willow explained. The absence of her physical presence is painful, but Willow said she knows Witt is still there in the house and on the land they loved together. 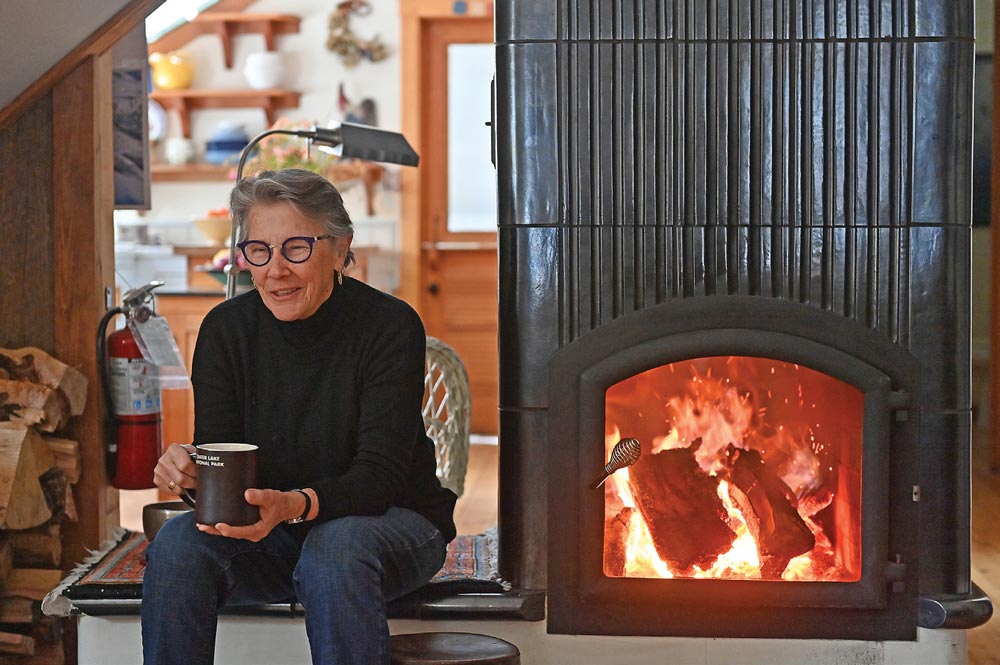 Driving to the cemetery, she stopped the car for a moment and looked into the meadow beyond the fence, the wetlands she and Lanita had carefully restored over so many years all lying quiet beneath a blanket of snow just like it was when they first found the property.

“Look at that, isn’t this just the most exquisite place in the world?”

This email address is being protected from spambots. You need JavaScript enabled to view it.

Willow-Witt Ranch is dedicated to the conservation and restoration of a unique ecosystem in the Southern Cascades, and the headwaters, wetlands, and forests that arise there. We provide education on the values of ecology and of the complex web of food and environment by operating a small certified organic farm and Farm Stay accommodations for a unique agritourism experience.